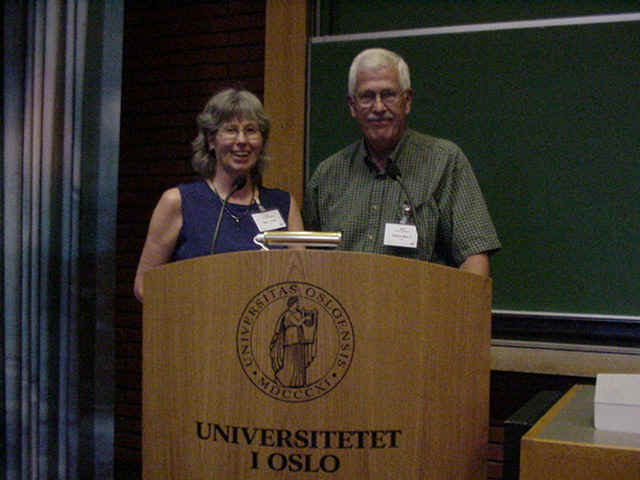 Symposium on: Basidiomycetes in Arctic-Alpine Environments

A Brief Description of the Session

The Arctic-alpine biome covers 8% of the earth's land (Körner 1995), and is one of the more sensitive areas to global climate change. Basidiomycetes (higher fungi) contribute to the ecology of cold-dominated environments in terms of decomposition, nutrient recycling, and symbiotic associations such as mycorrhizae. Surveys since the 1950's, particularly in the Alps, Greenland, Iceland, Svalbard, and Scandinavia have provided baseline data on these fungi. More recent work extends into Alaska, the Rocky Mountains, and Russia. Several International Symposia on Arctic-alpine Mycology (ISAM) have been conducted as field workshops since 1982 and resulted in 4 books on arctic-alpine fungi.

The symposium is focused on the diversity and distribution of Arctic and alpine tundra Basidiomycetes (higher fungi). Information will be included on species concepts, relationships among species complexes as well the ecological implications resulting from adaption to cold climates. Information on the presence and abundance of mycorrhizal taxa and decomposer's will be a theme in the presentations. In addition, traditional concepts of our view of just what constitutes Arctic and alpine fungi will be discussed. Lastly, the future of Arctic mycology will be examined by reviewing both concepts and knowledge resulting from past and present Arctic-alpine studies.

Several of the 'alpine' fungi from alpine tundra have been observed in lowlands but in association with Salix species; others can change the host genus in lower elevations. Vice versa 'lowland' fungi are occasionally observed in alpine tundra but seemingly without being able to establish permanent populations. Factors, which enable alpine fungi to survive the stress conditions of the alpine tundra, are either passive (growth respectively fructification in especially protected habitats or only during favourable periods or the ability of basidiomata to revive) or active (reduction of water content, increase of carbohydrate storage, special proteins and enzymes, membrane lipids etc.).

Extensive analysis of closely related species from alpine, subalpine and montane habitats should facilitate the investigation of ecological, morphological and phylogenetic species concepts in ectomycorrhizal mushrooms. Cortinarius favrei is one of the most frequent alpineCortinarius spp. associated with dwarf willow (e.g. Salix herbacea, S. polaris) and Dryas. The morphologically very similar C. absarokensisoccurs with shrubby willow in subalpine habitats. In contrast, C. septentrionalis, C. trivialis and C. vernicosus are closely related species occurring in boreal habitats in association with mostly deciduous trees. For this study, numerous collections of C. favrei and of C. absarokensis from circumpolar localities between the West-coast of the USA and the Russian Far-East were morphologically compared to each other and to closely related taxa of subgenus Myxacium section Myxacium. Moreover, nuclear DNA sequence data from the internal transcribed spacers (ITS1 and ITS2) were generated and analyzed for the study group. Based on these extensive molecular and morphological data, phylogenetic, morphological, and ecological species concepts in alpine fungi are discussed.

Based on c. 10.000 collections of basidiomycetes from the Greenland Herbarium in Copenhagen (C) a checklist including 843 species has been established (in press). A quantitative analysis of the composition of the list regarding mode of nutrition and taxonomic structure is presented and compared to that from a temperate, northern European region. The development of special arctic elements in the funga as well as different ways of adaptation to the cold environment is shown and some fungal taxa acting as pioneers in young landscapes are pointed out. Examples of the major distributional types of basidiomycetes in Greenland are presented as well as typical representatives of an arctic(-alpine) and subarctic(-subalpine) circumpolar distribution based on the authors collections from Alaska, Siberia, Svalbard, Iceland and the Alps as well as records from the literature. Finally, the biodiversity of the Greenland funga is compared to that of the well-investigated Greenland flora.

Svalbard is today an easily accessible arctic region with well equipped research stations and housing facilities. Never the less, the mycological exploration has been casual and our knowledge is fragmentary. Only the lichen flora, comprising almost 600 recognised species, may be considered well studied. During the almost 170 years from S. C. Sommerfelt published the first account on fungi from Svalbard, up till today, only about 600 non-lichenised fungi have been recognised. They belong to all four divisions of the Mycota, but only a few taxonomic groups have been systematically sampled and studied, e.g. ascomycetes of the genera Lamprospora and Pleospora, gasteromycetes of the genera Calvatiaand Bovista, agarics of the genera, Arrhenia and Galerina. An account on micromycetes on vascular plants exists (197 species) and a checklist of Svalbard's pyrenomycetes ss. lat. (129 species). Some ecological groups have been studied in detail, e.g. lichenicolous fungi (60 species) and dryadicolous fungi (34 species). Furthermore, soil fungi have been isolated from peat soils and mycorrhiza and root-associated fungi have been studied in a number of vascular plants. A taxonomic catalogue to Svalbard plants, fungi, algae and cyanobacteria was published in 1996 with the intention also of giving a broad impression of occurrence and ecology of the species. For most of the fungi this is very tentative.

49 - Fungal diversity in arctic Lapland and the Scandinavian mountains

In Fennoscandia (North Europe) the climatic timberline is 1200 m asl. in the central mountain massif of S. Norway, and decreases gradually towards the north and coastal areas. It reaches the sea level on the N. coast of Finnmark (71°N). The area above the timberline covers large parts (32%) of Norway. In Sweden the arctic (oroarctic) mountain areas are situated near the Norwegian border. In Finland the arctic vegetation covers only small areas in the northernmost Lapland. Records concerning Basidiomycetes from the arctic zone are sporadic. Some areas, particularly around the research stations, have been objects for more intensive studies and collecting. The following areas where relatively plentiful data is available are included in the presentation: 1) S. Norway, Hardangervidda (Finse), Jotunheimen, Rondane, Dovrefjell 2) N. Sweden, Norrbotten (Abisko) 3) NW. Finnish Lapland (Kilpisjärvi), the adjacent areas in Troms, Norway 4) NE. Finnish Lapland (Kevo, the fjells of Utsjoki and Inari), the adjacent areas in Finnmark, Norway About 400 identified fungus taxa (Basidiomycetes except wood-inhabiting Aphyllophorales) have been dealt with, and ecological aspects are discussed. There is a considerable reduction (60-80%) in the number of fungus species in the arctic zone as compared with that in the subarctic birch forests. The proportion of mycorrhizal species is highest (ca. 60%) in low arctic continental areas versus the low - middle arctic, slightly oceanic areas (45%).

Remarkably, macrofungi of the North American alpine zone have remained largely unknown until our recent intensive efforts in the Rocky Mountains revealed a diverse mycoflora. While Agaricales are well known for many arctic-alpine regions, only a few were reported above treeline in NA. To date, we have discovered over 150 species of Agaricales from the Canadian border south into the Rocky Mountains, and above treeline (3300 m at 45°N, 3600 m at 38°N). Most are typical arctic-alpine fungi at their furthest southern extent in NA. Predominant ectomycorrhizal plants are Salix reticulata, S. arctica, S. planifolia, S. glauca, Dryas octopetala, and Betula glandulosa (rare). Mycorrhizal taxa include Amanita cf nivalis, A. greenlandica, Russula nana, R. norvegica, R. delica, Lactarius nanus, L. glyciosmus, L. repraesentaneous, L. salicis-reticulatae, Leccinum rotundifolia (rare), Laccaria bicolor, L. pumila, L. montana, Entoloma alpicola, Cortinarius absarokensis, C. favrei,C. hinnuleus, Hebeloma spp., and over 28 Inocybe species. Bryophilous taxa include Omphalina, Rickenella, Galerina, Marasmius epidryas,Arrhenia auriscalpium, and A. (Phaeotellus) acerosus. Terrestrial saprophytes include Cystoderma, Lepiota, Melanoleuca, Calocybe, andCollybia. Most are known from other arctic-alpine habitats, some are alpine-subalpine, and a few appear to be new. Species distributions differ, with some restricted to northern or southern RM regions.

Approximately 140 species of Agaricales and Aphyllophorales in the Basidiomycetes have been described and reported from arctic tundra in North America. Of these about 30% are ectomycorrhizal associates of 14 species and two varieties of Salix, in addition to Dryas integrifolia,Arctostaphylos rubra, and Cassiope tetragona. Chief among the ectomycorrhizal associates are Cortinarius, Inocybe, Hebeloma, Laccaria,Lactarius, and Russula. Three species of basidiolichens in the genus Botrydina (Omphalina) are widely distributed and common. More than 32 genera of decomposers contain about 100 species. Galerina, Phaeogalera, and Leptoglossum have 22 species which are decomposers of pleurocarpous Bryophytes. Over 60 species of decomposers belong to the Coprinaceae, Tricholomataceae, Strophariaceae, and Hygrophoraceae. Distribution of tundra species appears to be circumpolar with restricted endemism. The mycoflora is discussed in relation to the Alaska North Slope tundra, and the arcto-alpine habitats in the mountainous regions of northern North America.

52 - Arctic-alpine agarics and boletes (Basidiomycota) past, present and future

By definition, arctic-alpine agarics and boletes are ectomycorrhizal, saprobic or parasitic mycota which closely interact-coexist with autochthonous associations of lichens, mosses and angiosperms exposed to the harsh ecological conditions above the upper timberline in alpine habitats or in tundra of Subarctica and Subantarctica. The first records on arctic-alpine macromycetes have been published by Hooker (1811, Iceland), Greville (1822, Scotland), Sommerfeldt (1833, Svalbard) and Heer (1936, Switzerland). In general, comprehensive data about taxonomy, ecology and distribution of arctic-alpine macrofungi are still scarce and limited to few localities of small geographic range in the Alps (Austria, Italy, France, Switzerland), Pyrenees (Spain), Rocky Mts. (Colorado), and several sites located in high circumpolar latitudes (Alaska, Fennoscandia, Faerøer, Greenland, Iceland, Russia, Svalbard). Taxonomically and ecologically the moss-, lichen- and peat-associated taxa ofGalerina are today by far the best known group of arctic-alpine agarics. Due to lack of data, the following localities are still white or grey spots on the arctic-alpine map viz. the Caucasus, the Himalayas, northern Japan (Hokkaido), and the high mountain ranges in the equatorial belt of South America (páramos), SE-Asia and Africa. Mycological fieldwork in these regions is urgent.

Documenting the diversity of gilled fungi in the North American alpine zone is a primary goal of the National Science Foundation Biotic Surveys and Inventories - sponsored Rocky Mountain Alpine Mycota project. As part of this project, a detailed study of the genus Laccaria was conducted using material collected at field sites above treeline in four mountain ranges located in the central and northern Rocky Mountains. Several Laccaria species are common components of the alpine mycota, appearing to be important ectomycorrhizal symbionts of the alpine dwarf willows Salix reticulata and S. arctica and shrub willows S. planifolia and S. glauca. Four taxa were identified on the basis of macro- and micromorphological characters: L. montana, L. pumila, L. cf. bicolor, and L. cf. laccata var. pallidifolia. Of these taxa, L. montana is reported only from the northern Rocky Mountain alpine sites, L. cf. bicolor and L. cf. laccata var. pallidifolia only from the central Rocky Mountains, andL. pumila from all four mountain ranges. L. proxima, collected at a subalpine site close to the northern field sites and in association with Salixshrubs, was not found above treeline. Ribosomal ITS DNA sequences are being analyzed to study biogeographic and phylogenetic patterns. The taxonomy, distributions, and ecology of Rocky Mountain alpine Laccaria species will be discussed.

IMC7 Field Trip to Svalbard (600 miles from the North Pole) 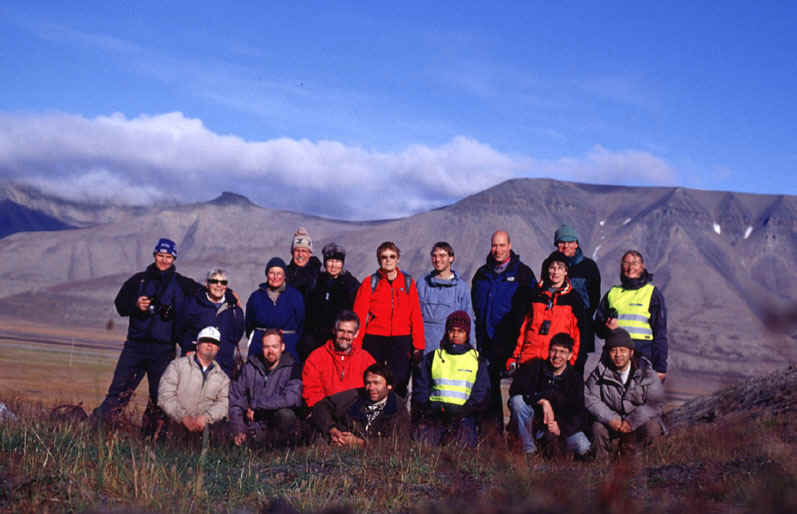 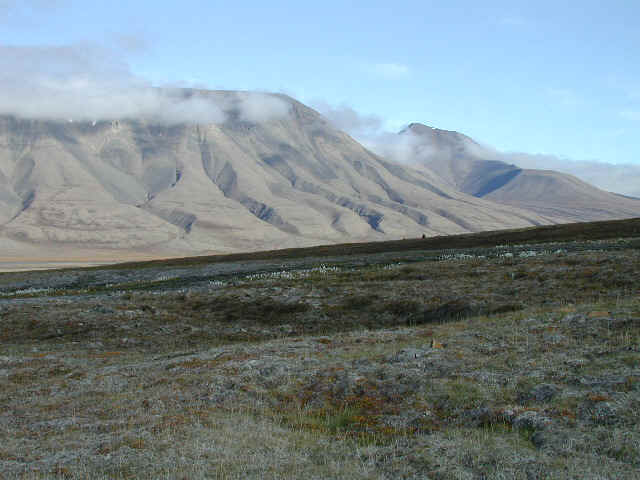 The isolated island of Svalbard (photo by G. Gulden).