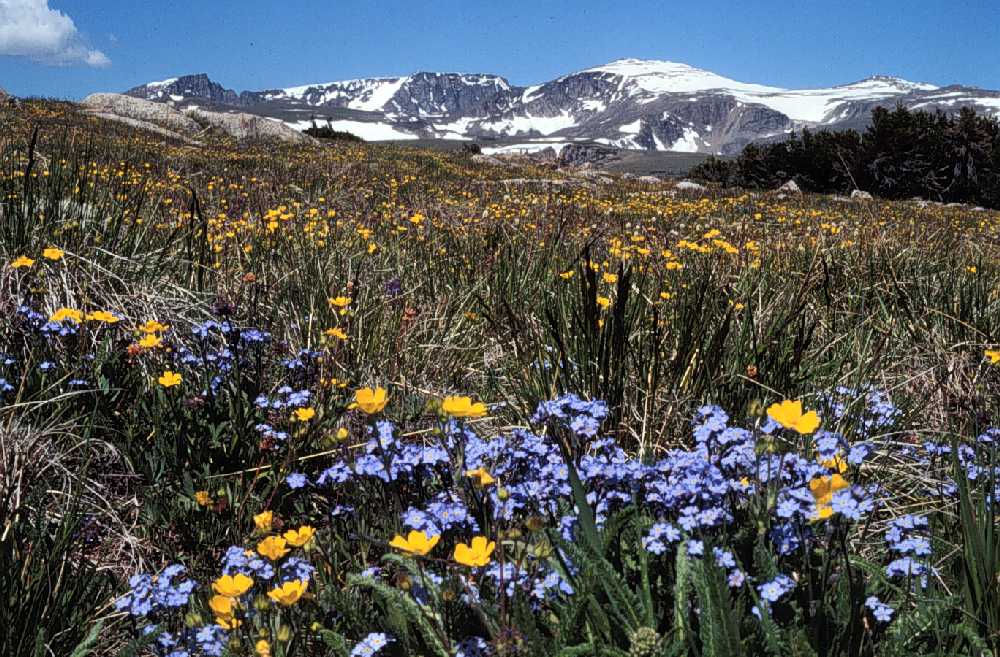 The Rocky Mountain alpine zone, although fragmented on mountain tops, constitutes a phytogeographically significant region, comprised of Northern, Middle, and Southern floristic provinces across a range of latitudes. For our study the alpine tundra is defined as the high-elevation vegetated regions above treeline. Like the arctic tundra, it is characterized by the absence of trees, the short stature of plants, and a low annual mean temperature. There are no clear statistics on the size of this noncontiguous life zone, but it covers hundreds of square kilometers and the Rocky Mountains extends 2,700 miles through the continent.

Sites are all above treeline, which ranges from 2,600 m at Lat. 450 N in Montana to 3,200 m further south in Colorado at Lat. 370 N. The boundary between the northern-middle and southern Rocky Mountain floristic zones is somewhere in Montana. Northern plant species go as far south as the Beartooth Plateau and a few into Colorado. Most southern (plant) endemics occur only as far north as Montana. Our study sites in Montana, Wyoming, and Colorado were chosen to include species from all floristic zones. Typical alpine habitats such as Geum turf, Deschampsia meadow, Carex bog, Salix wetlands, and Dryas slopes occur on the selected sites, and this complexity of habitats optimizes the potential for fungal diversity. Many areas escaped glaciation, and are potential "hot spots" of endemism.

The Beartooth Plateau is the primary study area for this floristic zone, which extends from Montana to northern Wyoming. The Beartooth is one of 11plateau’s along the Montana-Wyoming border, which together comprise some of the most extensive alpine tundra in the lower 48 states. About 900,000 hectares have been designated wilderness, and a substantial portion of this is above 3000 m. The Beartooth Plateau itself is approximately 12 mi long and 6 mi wide, at Lat. 450 N and 1090 W, and was formed from an uplift of precambrian granitic rock cut by basaltic and acid-porphyry dikes. The vast sweeping gentle slopes are covered by an intricate patchwork of meadows, shrubby wetlands, grasslands, and fell-fields.

The area is floristically diverse with over 422 species of alpine plants which has been attributed to the 1) expansiveness, 2) east-west orientation with many moist N-facing slopes, 3) dissection of north-south migration routes, 4) high elevations which escaped glaciation, 5) variety of soil types, and 6) the relative accessibility.

The southern Rocky Mountains are isolated from the other mountain zones by the Wyoming Plateau. Southern ranges run north-south and are primarily granitic flanked by sedimentary rock. The individual study sites lie in a chain along the Continental Divide at elevations averaging 3,200 m at Lat. 37-400 N, and include the broad open windswept slopes of Independence Pass, Loveland Pass, Niwot Ridge and Cottonwood Pass. Scattered along the spine of the Rockies, they boast a diverse array alpine habitat types such as shrubby wetlands, Dryas-covered slopes, extensive dwarf Salix patches, meadows, turf, and fell-fields. Endemism typically increases towards the southern end of a cordillara. Inclusion of these sites will optimize the discovery of new species (southern endemics, subalpine-alpine species), and document southernmost reaches of arctic-alpine fungi in the US.

It might seem unlikely for ectomycorrhizal fungi to occur above treeline since they are usually associated with the roots of trees.  However, ectomycorrhizal fungi can be prolific at high elevations and are estimated at well over 270 species for 9 main genera in arctic and alpine habitats.  Alpine ectomycorrhizal fungi are primarily agarics (gilled mushrooms) mutualistic with alpine plants such as dwarf willow (Salix reticulata, Salix arctica), shrubby willow (Salix planifolia, Salix glauca), bogbirch (Betula gladulosa), and the mat plant Dryas octopetala, although other plants are implicated.  One goal of our study is to examine the specificity of these mutualisms in alpine systems.